So it finally happened.

We bought a minivan.

The fact that we bought a minivan seemed to evoke (provoke?) plenty of discussion among our friends and family. As we waited at the dealership for the paperwork to be finalized, I posted a picture to Facebook with the caption “It’s finally happening. Now.” The reactions were swift, with most people falling firmly in one of two camps—Yay, you bought a minivan! or Noooo! Don’t do it! You can’t buy a minivan!

The happy minivan owners couldn’t stop raving about life with their swagger vans. “Drove to Savannah, GA and Portland, ME in last few months with kids in Odyssey. It’s a no brainer!” wrote one friend, while several others gushed, “We LOVE our Odyssey!!!”—capital letters and exclamation points included (and there were often many).

I’ve never been anti-minivan, and honestly, I’ve always wondered why some people hold such animosity towards them. “I hate minivans. We’re never getting one,” I’ve heard people say not so quietly. “No, sure, it’s practical,” they admit, barely hiding their disdain, “But I would never get one.”

Perhaps it was fear of being criticized or judged that made me hesitant about buying a minivan. When we had Colin a few years ago—making us an official party of five—we could have bought a minivan then. I remember how my parents chided us, in the loving way parents do, “You’ll see, you’ll need a minivan. It’s much more practical.”  So of course we went with an SUV with a third row, the standard alternative for non-minivan-driving families.  And while our SUV has been a great car for us, honestly, with the exception of a handful of larger truck-like SUVs, third row seating is really too tight for most adults. It’s especially a little tight for long road trips, which we take at least once a year when we go to Michigan to visit family. Though our boys are young now, it won’t be long before they’re taller than their mama.

It means you’ve arrived in your late-thirties and you accept that youth is for the passengers sitting behind you because you, well, you’re the driver.

So with three growing boys, the minivan felt inevitable. And maybe that’s really why we put off making the leap to minivan life for as long as we did—it’s the inevitability of it all. It’s knowing that a minivan means you’re at a stage in your life where you make the reasonable decisions that grown-ups are supposed to make. It’s seeing a connection between the three white hairs you’ve pulled out of your head in the last few months and two gracefully sliding, sliding doors. It’s understanding that you’ve arrived in your late-thirties and you accept that youth is for the passengers sitting behind you because you, well, you’re the driver.

For their part, the boys couldn’t be more excited. Colin, in particular, kept asking me if it was really true, “Are we really going to take the minivan home with us? Really?” The first time I used the remote to open the sliding doors, he stopped mid-stride and wide-eyed, “It’s like it knows we’re coming!” To him, it was sheer magic (maybe not as magical as the classic Darth Vader Volkswagon commercial, but pretty darn close).  Inside, he and his brothers took turns climbing back and forth between each row, testing each seat, adjusting the captain’s chairs up then down, then down and up—until they each decided where they would sit (which turned out to be exactly where they’ve always sat in our other cars).

As we drove around today in the minivan, I sighed and said to the boys, “Well, I guess this means that mommy is really old now” (when I started to refer to myself in the third person as mommy, I don’t know). Sensing my resignation, Toby, our 8-year-old, asked, “Why is that a bad thing, Mommy?”

You know what? I thought to myself, it’s not.

For so long, a minivan represented something lost. But when I looked through my rearview window today and saw my boys’ joyous faces, I realized that I haven’t lost anything. Instead, I’ve arrived. I’ve arrived at a point where I’m old enough not to care what others think either way, where I care less about what the things I own might say about me, and more about the value I bring to my family, my friends, my colleagues, my students. Why did I care so much about what buying a minivan meant? What does it really matter in the end? 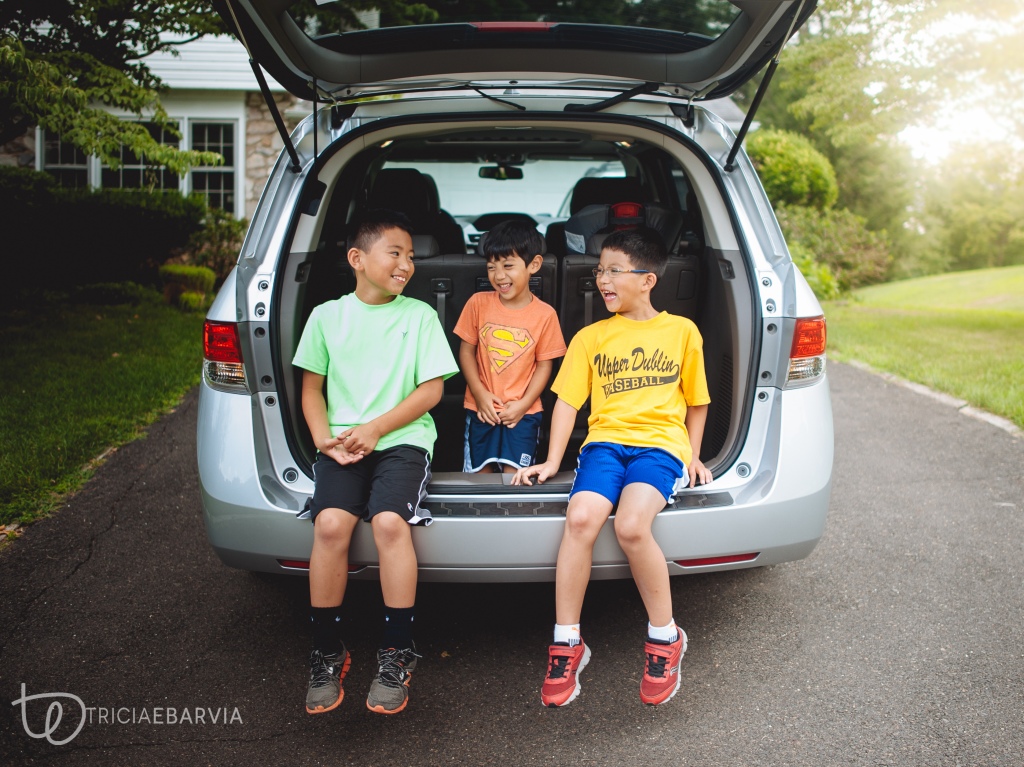 This post is part of the Slice of Life challenge, hosted by Two Writing Teachers, a weekly invitation to share a snapshot of ordinary life through writing.