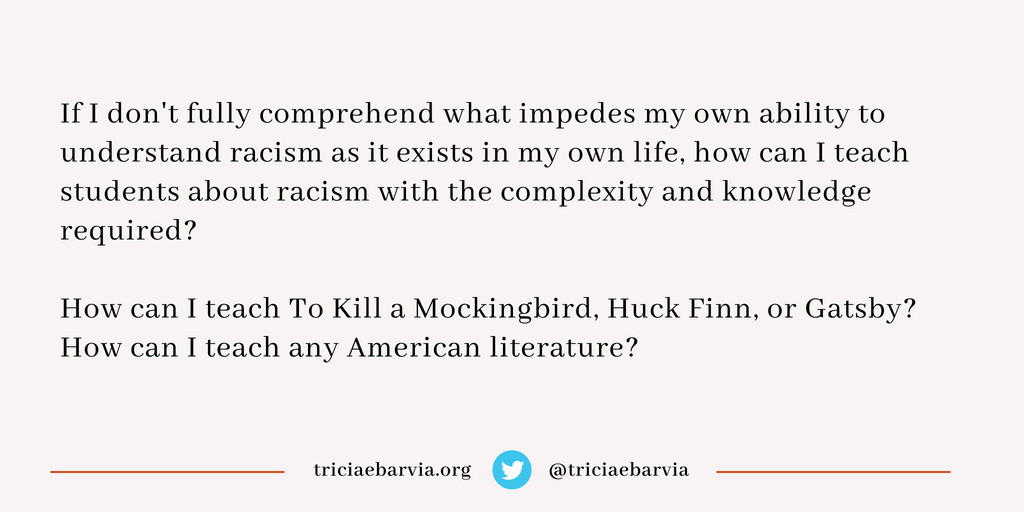 Reading a few conversations online recently, I’ve been thinking a lot about the urgent need for us as teachers to do some hard, internal work of unpacking the identities we bring to the classroom. More and more lately, I’ve seen teachers get defensive in conversations about curriculum, which I’ve come to realize are often really conversations about racism, sexism, classism, and other issues in which arguments about books and the canon have become a proxy.

Teaching is an intensely human activity. The best teachers are those who know that teaching—and students—cannot be standardized. Giving two teachers the same curriculum and asking them to follow it “with fidelity” is an impossible task. Not only are the teachers different individuals, but they’re also charged with the care of dozens of individual children.  We teach who we are. This is what can make our practice so powerful—even transformative—but also potentially dangerous.

We bring all of our identities—and the experiences that informed them—into our teaching. So we have to interrogate the ways in which these experiences have shaped our practices and our relationships with kids. These experiences are those that gave us opportunities to be educated ourselves, which eventually led to our teaching “credentials.” It’s this professional learning and all our years in the classroom that we draw upon when we make decisions. We draw upon our years of kid-watching and theory-making.

But I would argue that it’s often our personal identities and experiences that have the most profound effects on our teaching, and that which most often—and most dangerously—go unexamined.

Since launching #DisruptTexts with Lorena German, Julia Torres, and Dr. Kim Parker, there’s been some necessary, sometimes difficult, conversation around teaching canonical texts. To be clear, my feeling is not to “get rid of” texts carte blanche. To me, #DisruptTexts means applying a critical, anti-bias, anti-racist pedagogy to all texts—and yes, in many cases, that will mean confronting, directly, the problematic issues inherent in traditionally canonical texts (and in some cases, removing those texts to amplify the voices of others).

That said, a frequent line of reasoning from those who defend the “canon” is that there are certain “literary” works that are rich and rigorous that all kids should have to be “educated,” that they’re missing out on something critical without [fill in the blank].

But here’s the thing: Most teachers, especially secondary English teachers, were educated in a system and in a “canon” of texts that included some voices but excluded many more others. To call into question the validity of the “canon” means that we have to acknowledge our complicity in this exclusion.

I think we need to recognize that when we defend the “canon,” we might also be defending our own perceived expertise. And when that expertise is challenged, it feels personal.

I speak from my own experience. As an Asian American, Filipina American woman who has always felt the pressure to “fit in” and “prove” myself in many spaces, I saw my expertise in the “canon” as evidence of my intellect (and perhaps as a path to White adjacency). Knowledge about a specific set of texts was a way to have academic power, but I never stopped to question who made up these rules about power in the first place.

Ironically, when my students and I read Achebe’s Things Fall Apart, we discuss how schools were often used as one of the most effective tools of colonizers. Control what people think, I remind them, and you can control what they do—and what they can’t.  What I didn’t recognize was my own complicity in such a system. In the words of anti-apartheid leader Steve Biko, “the most potent weapon of the oppressor is the mind of the oppressed.” This is why we must disrupt texts, disrupt our pedagogy.

Another example of the way my identities have affected my teaching is through my privilege.

I grew up and live in an affluent, predominantly White, somewhat progressive suburb. I live and work in two of the most “high-performing” districts in the state as indicated by many local and national school rankings (for whatever those are worth).

At first glance, my community seems like a great place to live: lots of public parks, low rates of violent crime, access to multiple grocery stores and shops. But one reason for this is because of the racial segregation—carefully and explicitly orchestrated through our legal system—that have shaped many metropolitan areas.

I have to acknowledge that. I can say I live where I live because I want what’s best for my kids, because my parents live close by and family is important. This is all true—but it is ALSO true that I’m complicit in an ongoing system of structural racism.

This structural racism has limited the diversity of people around me and my ability to empathize with others (see Alvin Chang’s research to examine the segregation in your own local area). When I reflect on my own racial literacy in recent years, it’s been my relationships w/other people of color that have transformed my understanding of racism, especially anti-Black racism.

Why does this matter in my teaching? Because if I don’t fully comprehend what impedes my own ability to understand racism as it exists in my own life, how can I teach students about racism with the complexity and knowledge required?

How can I teach To Kill a Mockingbird? Huck Finn? Gatsby? Or really—any American literature? How can I teach students about holidays like “Thanksgiving” or figures like Martin Luther King, Jr. responsibly? How can I offer students #ownvoices narratives in my classroom library?

It’s the privilege that my personal experiences afford me that also partially explains my shock at recent events: the racial slurs hurled at POC on buses, police called on Black Americans going to the pool, “family detention centers” erected to imprison refugees. The truth is that none of the injustices we’re seeing today are new, just the latest iterations; everything present has its precedent.

And although I am privileged—or perhaps because I am—and went to excellent schools, never in my schooling were the full atrocities of racism ever really explained.

This lack of knowledge limits my ability to teach fully and truthfully. Instead, I might combat racism with platitudes like “be kind” or simply encourage kids to be “colorblind,” which only further erases the experiences of people of color. If we refuse to see race, how can we even begin to talk productively about racism?

Where does this leave me? Overwhelmed, angry, impatient, and sometimes, resigned. But that’s when I’ll try to listen and read, fill in gaps I’m still unpacking. That’s when I seek others who will challenge me to grow. That’s when I know I need to speak up, push back when I see practices that can be damaging to kids.

Educating ourselves—asking hard, uncomfortable questions that we might not like the answers to—can be the first step towards activism, but this self-reflection itself isn’t sufficient, as Melinda Anderson graciously reminded me when I posted my initial thinking online. Here are her words:

The tricky part is that once teachers (namely, white teachers) start to ask themselves those questions, the answers can be upsetting. They come to see how they’ve marginalized/discriminated based on race/ethnicity. And that can bring feelings of guilt. And what do they do then?

Learning to turn that guilt into action is *activism* and requires more than self questioning. It requires teachers (namely, white teachers) surrounding themselves w/ white ppl who can support them in their personal growth and learning around how to become anti-racist. Not easy!

It can mean losing friends. You’re now the person who’s called to “speak up, push back” and who wants to be *that person* all. the. time!? It means unlearning and relearning a lifetime of being. It’s coming to understand what you know as “just normal” is rly socially constructed!

Self-questioning can eventually lead to activism — or it can lead folks to revert to what’s comfortable. Because it’s not easy path to walk. And more than anything, to get to activism teachers (namely, white teachers) need support from like-minded white people.

Melinda’s comments remind me to push forward. Just being aware of our privilege, of our biases as teachers, isn’t enough. It isn’t even close to enough. We must act to remedy and repair the damage that these biases have inflicted on our practices and our students. I’m reminded of Cornelius Minor’s words last year at a Heinemann Fellows meeting. After an afternoon of leaning into our biases and interrogating racism inherent in our society and educational systems, he told us, “This isn’t the work. The work is what we do when we leave here.”

We must find ways, small and big, to disrupt the systems around us. It won’t be easy. Confronting our own complicity, intentional or not, will be hard work. But what is hard is often necessary, and we should welcome the discomfort, for that is where the most meaningful learning and growth can happen. 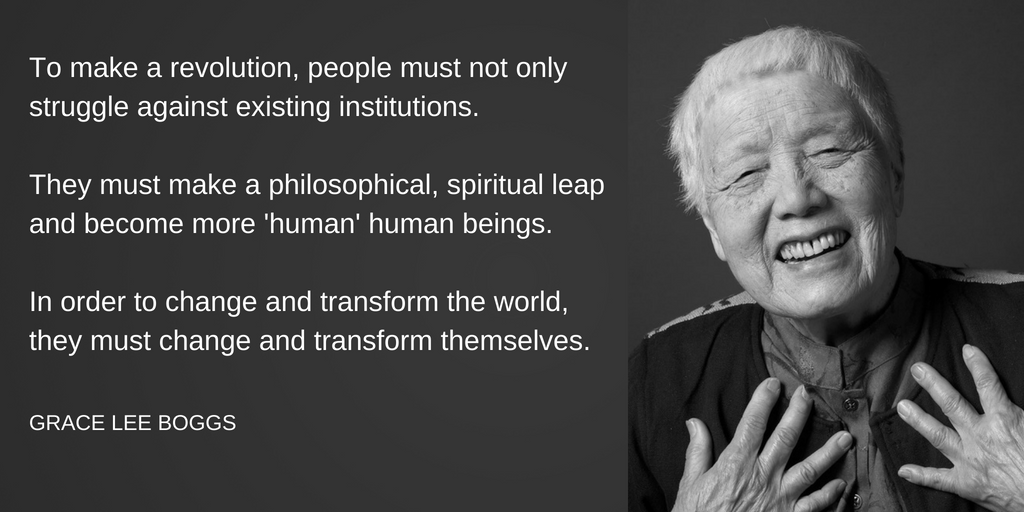 NOTE: This blog was originally written as this Twitter thread and revised.

Thanks for reading — feel free to share your thoughts below. Cancel reply