The end of the week is finally here. I think I speak for most of my students and fellow teachers when I say that Friday couldn’t come fast enough. It’s been one of those weeks where every day I rushed to get things done, and yet wonder how much I really accomplished. Though I consider myself a generally positive person, when it comes to classroom time, I’m more of the “glass half empty” persuasion. In other words, I tend to worry about what didn’t covered in class. I think a lot of teachers are like that. There’s just never enough time tends to be a common refrain.

That said, I also know that the glass isn’t half-empty but half-full. As I reflect on the last few days, then, I thought I’d take a moment to hold on to what (I think) went well this week.

Last summer, I wrote about how I needed to do more getting out of the way—instead of being the proverbial sage on the stage, I’ve tried to be more cognizant about stepping to the side to allow for more student voice and ownership over what happens in the classroom. Less teacher-directed and more student-led activity—that’s the goal.

This week, I took a few humble steps in that direction, inspired by EdCamp.

I registered for EdCamp Philly last week, and it got me thinking. What works about the EdCamp model is that it is teacher-driven professional development. Rather than have pre-scheduled sessions and speakers in which teachers are spoken to, an EdCamp is unstructured. There are no pre-planned sessions; instead, teachers show up with something they want to learn or to talk about, post their interests on a large sign-up board, and then gather by these shared interests.

My 9th graders had been reading for two days in class, as per our flipped reading approach, and although they’d been sharing their responses online, I knew that they still would have a lot they wanted to discuss in-person on our next discussion day. I also knew that there would be almost too much to discuss as a whole class. So rather than choosing a few topics or themes myself, I decided to let my students decide what they wanted to talk about.

And thus, I borrowed the EdCamp model.

When students walked into the room on our discussion day, I had them write down a list of burning questions or issues they had about the book so far. “What are things you feel like you really need to talk about regarding the book?” I asked them. I told them to write down things that were “worth talking about.” I cautioned students not to make the items on their lists overly specific—for example, a question that could be answered rather quickly—but also not to make their questions too broad.

After students had about four or five items on their lists, I then asked, “Who has something they feel strongly about?” A few hands went up. I handed out large post-its (8×6 size) to these students and asked them to write down their topic on the post-it. I asked for a few more volunteers until I passed out twelve post-its.

Why twelve? Because I had twelve “sessions” scheduled for class that day. On the board, I created a schedule for class. We would have two discussion periods of 15-minutes each. During each discussion period, there would be six sessions—or put another way, six groups of students gathered together to talk about a given topic Why six? I have between 20-24 students per class, so six groups allows each group to be comprised of 3-4 students, a nice size for discussion. 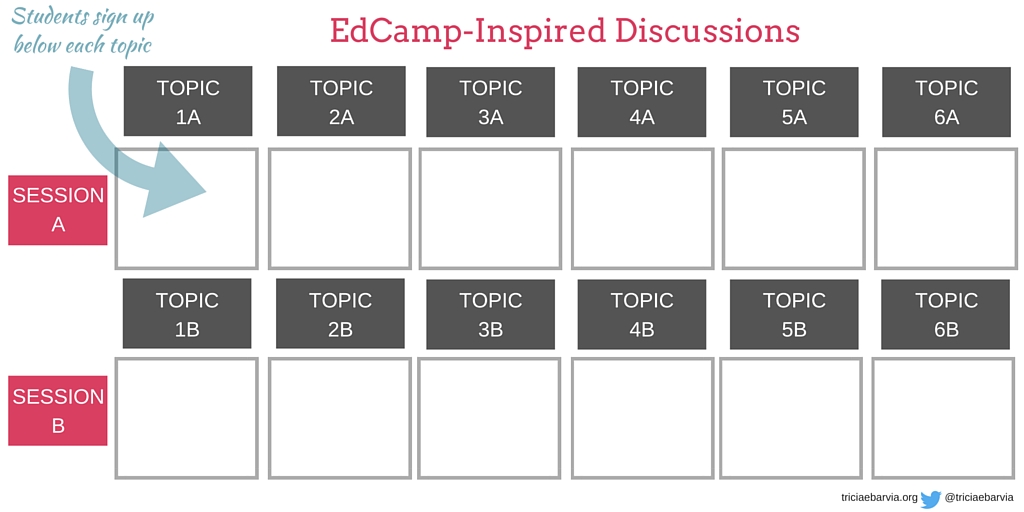 After students finished writing their topics on the post-its, they posted their topics to the whiteboard in the grid I had drawn (above). I read through the topics and asked students to consider which ones they were most interested in discussing. I then gave students 5 minutes to quickly sign up for two topics, one during Session A and another during Session B. To avoid too many students in one group, I told students that once a topic had 3 students sign up, the session would be “closed” for that topic (for classes with more students, students could only join a session of more than 3 if all the topics were already filled). For a few classes, there were duplicate topics, but that was okay—after all, that just meant more students wanted and had a chance to discuss something they were really interested in. 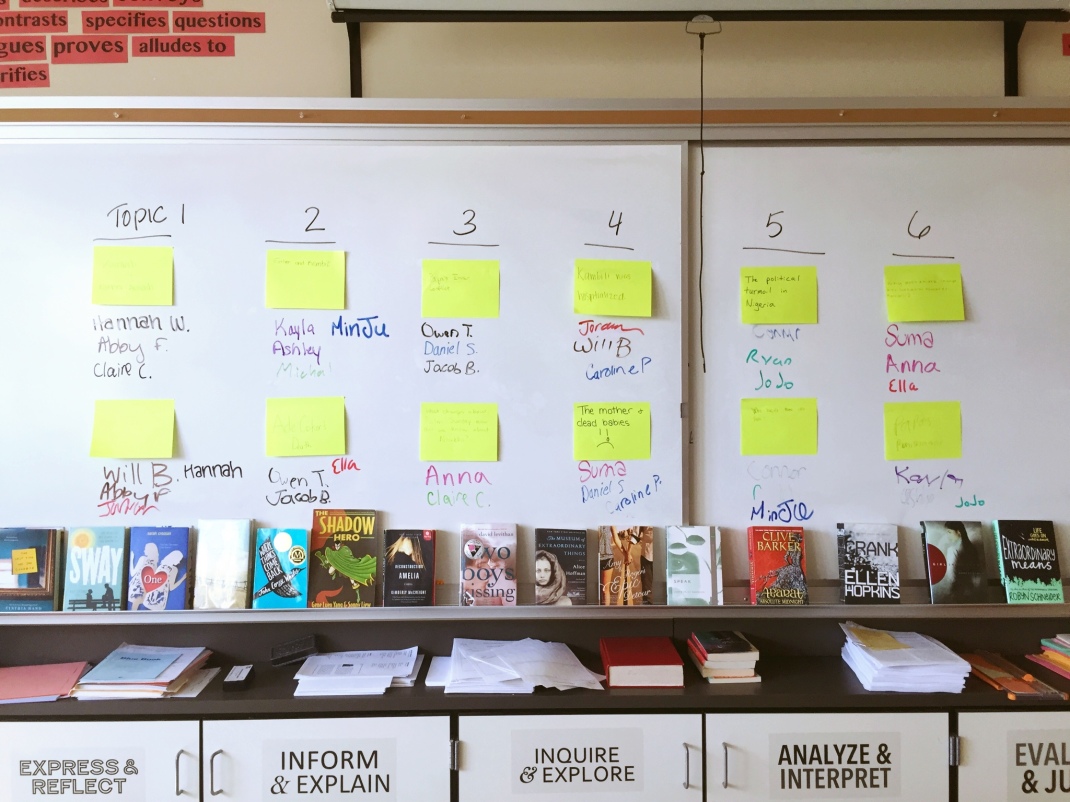 I gave students a handout that asked them note their discussion topic, the key parts of the book that they discussed, and then their takeaways from their discussion.  As I said, each session lasted 15 minutes. If some groups found that they didn’t need all 15 minutes to discuss, I let them choose another topic from the board to talk about.

As I circulated around the room, the discussions were generally lively and animated. I think students appreciated the chance to both create and then choose their own discussion topics (one student actually said, “Oh, this is fun!” when she realized what we were doing). Because I had asked students to talk about key parts of the book that were relevant to their topics, I saw several students opening their books and rereading the text, finding evidence to support their claims. I sat in on several discussion and listened as they shared their opinions. I was happy to see—and hear—that they had a lot to say.

No doubt choice played a significant role in this activity, but I think the fact that I consciously withheld class discussion for two days also helped. By the time it was our discussion day, students were itching to talk. Sure, they had been posting their responses on the discussion boards at night, but there is no substitution for the lively face-to-face conversations that can happen when a group of engaged readers get together to talk about what stood out to them.

And really, I suppose that was the key—it was about what stood out to them. Whether it was on the discussion boards online or the EdCamp style discussions in class, all conversation was primarily driven by what students were bringing to the text. Aside from a few select essential questions that served as small writing prompts, I did not hand out nor assign a single study guide question. (And of course, it also helps that the text itself is one that students have always found very engaging.)

As I look back over the last few days, I realized that I had become a true facilitator. As the teacher, I created the conditions in which students could do the talking.

And I could just get out of the way. 🙂

This post is part of my “Getting out of the way” series in which I try to move from the front of the room and step to the side—to develop student voice and sense of agency. Less teacher-talking and more active student engagement. “Whoever is doing the most talking is doing the most learning,” I once heard an NCTE presenter say. Indeed.

Thanks for reading — feel free to share your thoughts below. Cancel reply