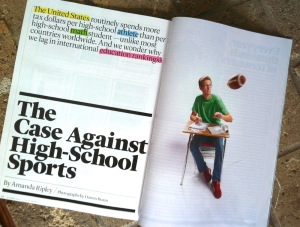 One of my favorite essays in my AP Lang & Comp class is Amanda Ripley’s “The Case Against High School Sports,” originally published in The Atlantic. Ripley’s argument is particularly provocative as she questions the possible disproportionate value that schools place on sports versus academics. Conversation is always animated—students tend to feel strongly about the value of sports in schools, both for and against—and discussion can sometimes even get a little heated. Vigorous debate ensues.

Unfortunately, depending on the class, I’ve found that it can be hard for students—and really, for anyone—to look beyond their own points-of-view, especially the more invested they are in those viewpoints. The students who participate in sports feel defensive while the students who don’t participate in sports feel validated. As a teacher, I generally play “devil’s advocate” to any viewpoint students have—for or against—to try to challenge and extend their thinking.

Still, I often find that I’m doing too much of the negotiating and managing of class discussion. Even when most of what I’m doing is asking questions (versus asserting opinion), I’m still the one doing a lot of the “work,” so to speak.

Last week, I decided to approach the text a little differently. Students still read, annotated, reflected in writing about the text, and then talked in small groups. Through small-group discussion, students could get their “first reactions” out in the open. The key, however, is trying to channel those first reactions into a larger group discussion and then to move to objective, thoughtful analysis of the actual argument in Ripley’s piece.

So here’s what I did.

After their small group discussions, I asked students to list the most important factors that needed to be considered in the argument for/against high school sports. I invited them to consider factors found in Ripley’s piece as well as outside factors. I gave each group three large 8×6 post its and asked them to choose three of the most important factors to consider and write one on each post-it. Students consulted the text but also added some of their own ideas. “When you’re finished, put your post-its up on the whiteboard,” I said as I walked around the room.

With the post-its on the board—and in no particular order—I asked one student from each group to go up to the board. I told students they had about three minutes to read through post-its and rearrange them from “more compelling” to “less compelling.” If any of the post-its included the same information, they should group/stack them together (see diagram below).

After three minutes, I switched out the students at the board and asked for a different student from each group. Now they had three minutes to continue rearranging the factors from more to less compelling. I repeated this two more times so that each student had the chance to go to the board.

As students at the board argued over how to rearrange the post-its, they debated the merits of each factor listed. For example, on one of the post-its was Later start time for school, alluding to the way school start times are organized so that daylight hours are maximized to allow for sports practices and games. I saw several students argue over where that particular factor belonged—was that more or less compelling because they were high school students? they wondered.  Most students seemed to agree that the amount of money spent on school sports versus academic areas like math was the most compelling factor to consider. “Why should schools spend more money on sports and take away money for academic subjects?” one post-it read. Students who were sitting at their desks watched and tried to give their feedback to the students up at the board—No, put that one over there! What, why did you move that?

Only after all the rounds were finished did I step in. I went down the line from more to less compelling and asked students to comment. Even then, I facilitated the discussion rather than directed it. In the past, our discussions of the text tended to be more of the unstructured, free-for-all variety. And while that type of discussion can be engaging and even useful, it doesn’t always allow all voices to be heard or to encourage the type of reflective thinking that (I think) this activity did. The visual and kinesthetic aspects of this activity also made the discussion more engaging. “That was fun,” a student told me the next day. “It helped to see the reasons for the argument laid out on the board that way.”

When we finished, I took a step back from the board and pointed out what the class did. One of the key skills that the AP exam assesses is students’ ability to reason and think through an argument. “Remember that AP prompt we looked at last week?” I reminded them. “In it, the prompt asked you to evaluate the factors X should consider when… If you look at the board,” I continued, “Isn’t that what we just did?”

And the great thing was that they did it (mostly) on their own.

This post is part of my “Getting out of the way” series in which I try to move from the front of the room and step to the side—to develop student voice and sense of agency. Less teacher-talking and more active student engagement. “Whoever is doing the most talking is doing the most learning,” I once heard an NCTE presenter say. Indeed.