My AP Lang students are currently working on their “On” essays—writing on anything they choose.

There’s a long tradition of “On” essays in the world… and by an “On” essay, I mean any essay whose title starts with the word “On…” (although, really, isn’t anything an “On” essay if it’s on a topic? The distinction for my purposes in teaching is really just technical). We read essays like “On Keeping a Notebook” by Joan Didion and “On Dumpster Diving” by Lars Eighner, which explore process. We read a contemporary essay like “On Compassion” by Barbara Ascher and a 19th century essay like “On Running After One’s Hat” by G. K. Chesterton, which delve into the philosophical as well as social commentary. We read “On Being a Cripple” by Nancy Mairs and “On Being Black and Middle Class” by Shelby Steele,” which focus on identity. We read essays by Lewis Thomas, whose essays,“On Warts” and “On Probability and Possibility,” are some of the best examples of elegant science writing—and writing in general—I’ve encountered. And still we read other essays whose titles don’t begin with the word “On” but embody the ethos of writing on what it means, ultimately, to be in the world—essays like “The Jacket” by Gary Soto and “Me Talk Pretty” by David Sedaris and “Salvation” by Langston Hughes.

We study and celebrate these writers and their craft. We ask ourselves questions that help us read like writers: What can I take away from this? What can I learn? What can I steal? Because my AP Lang students read Austin Kleon’s Steal Like an Artist for summer reading, we remind ourselves to embrace being artistic thieves. We look at the ways in which these essays explain, define, and describe; how they use anecdotes and allusions; how they feature both insight and curiosity; how they zoom in and zoom out. 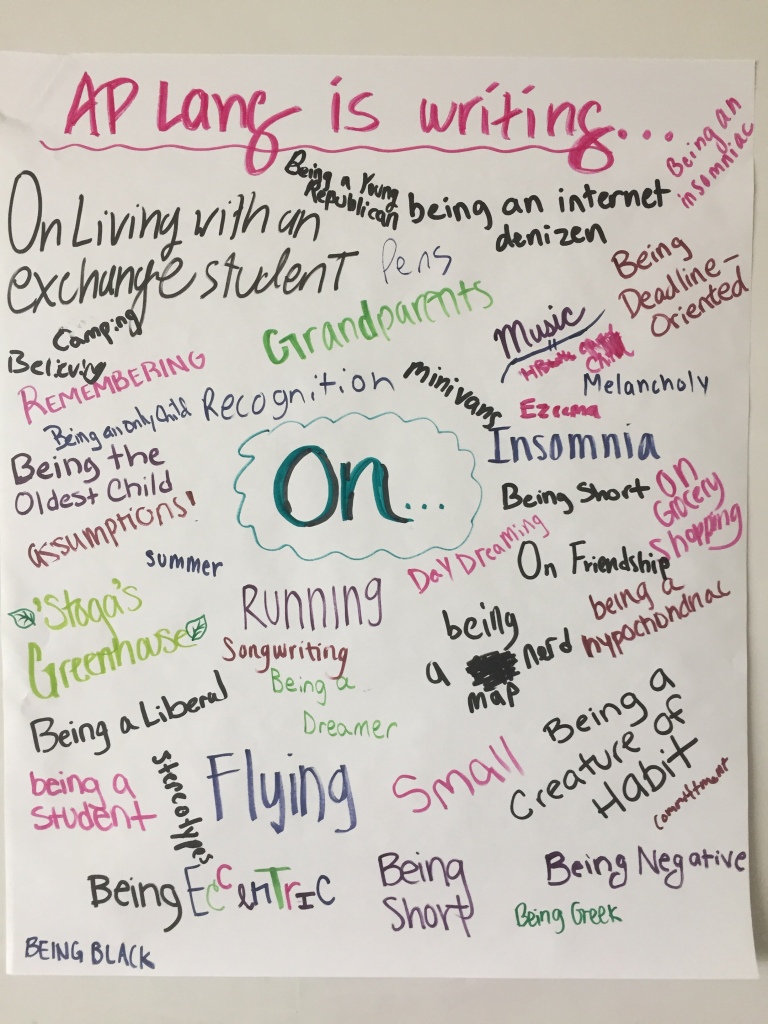 To get us moving through the writing process, we spend a lot of time prewriting. As Don Murray reminded us, “Prewriting usually takes about 85% of the writer’s time.” Murray continued:

Prewriting is everything that takes place before the first draft. Prewriting usually takes about 85% of the writer’s time. It includes the awareness of his world from which his writing is born. In prewriting, the writer focuses on that subject, spots an audience, chooses a form which may carry his subject to his audience. Prewriting may include research and daydreaming, note-making and outline, title-writing and lead-writing.

What I especially love about prewriting is the spirit of discovery that takes over. Just yesterday, a student shared with me a story of how, in elementary school, his mom had come to pick him up in a different car. While he searched for the metallic gold Toyota Sienna minivan in the carpool line, his mom was driving up in their Subaru Outback. He panicked, “I couldn’t find my mom!” The memory of that moment, the anxiety and fear, all came back; you could see it on his face. He hadn’t thought about that moment in years, but there it was.

And this is what writing does—it reminds us of who we were, who we are, and whom we hope to become. As Joan Didion points out in “On Keeping a Notebook,” we write to keep in touch—on “nodding terms”—with our former selves. Doing so makes us and keep us whole. Writing preserves our integrity.

PREWRITING THROUGH THE MODES

One strategy that I have found particularly useful for prewriting is to ask students to think about their topic and write about it using multiple modes. Last year, I wrote my own “On” essay called, “On Bah Humbug!” In it, I lamented how the holiday season has become an increasing source of stress for me. Christmasses as a child were filled with tidings of comfort and joy. Christmasses now are filled by endless lists of things to do, traffic lines-too-long to the mall and even longer lines at the register. To model writing through the modes, I took my topic and wrote about it in a variety of ways:

Although I didn’t use everything I wrote, I did use enough of it. But more than that, I would argue that writing about my topic through each of these modes allowed me to figure out what I wanted to ultimately write. Students try out these modes as “vantage” points from which to examine their topic, and then go back to reexamine our “On” Essay mentor texts to see how professional writers also draw on the modes. 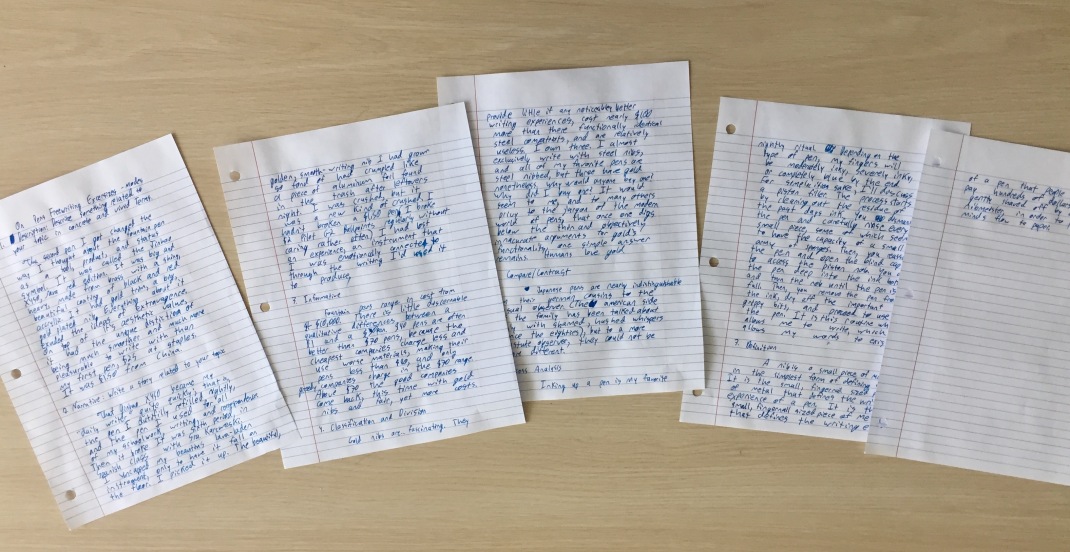 The legendary photographer, Ansel Adams, once said that “Photography is knowing where to stand.” I’d say the same thing is true for writing, too.